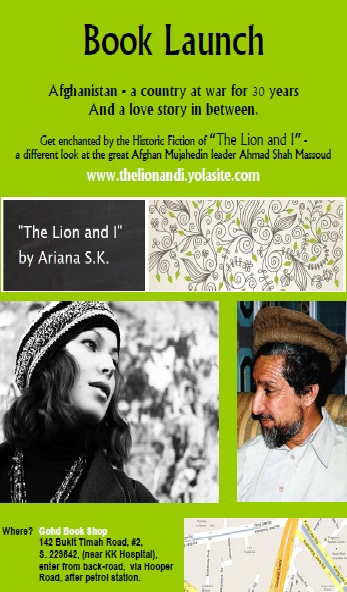 GOHD Books is thrilled to host the launch of the novel The Lion and I by Ariana S.K. on Sunday, 26 February 2012.

Set in modern Afghanistan, The Lion and I is the tale of a woman who, in 1997, goes to Afghanistan at the spur of the moment to fulfil her dream of meeting the great Afghan Mujahedin leader Ahmad Shah Massoud, also know as The Lion of Panjshir.

Vividly depicting the geography, culture and political environment of pre and post-war Afghanistan, the novel revolves around the life and struggles of Ahmad Shah Massoud, the famed guerilla fighter who was instrumental in expelling both the Soviets and the Taliban from Afghanistan. As the story develops, the author relates in subtle details Massoud’s character, nature and abmitions, Afghanistan’s landscapes, and the people and their suffering .

The novel is loosely based on the author’s own experiences in Afghanistan, where she lived from 2006 to 2011. A German national who lives in Singapore, Ariana Simran Kaur is deeply inspired by Ahmad Shah Massoud, whose legacy she has explored in her travels to the many places where Massoud lived and fought, and through her meetings with those closest to him. Durng her time in Kabul, she frequently visited Massoud’s native valley of Panjshir, located some 2 hours north of the city. Ariana S.K. Has a deep love for Afghanistan, and will donate the proceeds of her book to the Ahmad Shah Massoud Library & Culture Centres across Afghanistan as a personal contribution to the development of the war-torn country.

Save 10% on the regular retail price + get author-signed copies which include a free CD with songs featured in the book (exclusive to the launch only!). While stocks last.

The author is a university graduate and holds a Master’s degree in Political Science as well as an MBA. She is a Singapore PR and German Citizen.

She lived in Afghanistan for five years between 2006 and 2011 attempting to contribute to the country’s advancement with her work in private sector development. She has travelled to many places where Massoud lived and fought, and met with many people who were close to him. She was a frequent visitor to Massoud’s native valley of Panjshir located some 2 hours north of Kabul. Before living in Afghanistan she had visited the country several times between 2004 and 2006, travelling to various historic sites.

More information about the book can be found at http://thelionandi.yolasite.com/

The Lion and I is available through the following outlets: