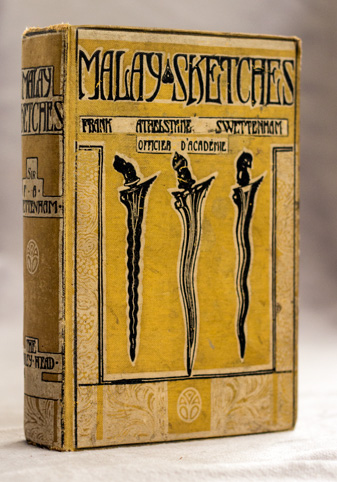 This book, for us, is a truly exciting acquisition, firstly because it brings us much, much closer to home. Also, for anybody who has grown up in Singapore, Frank Swettenham is a familiar name who has appeared in practically every history textbook ever manufactured by The Republic.

Malay Sketches is, by and large, an account of the state of Perak. Even the book’s cover reflects this, with the three different types of kris (daggers) being illustrations of actual kris from the Perak museum at the time (late 1800s). And the account is vivid and engaging, although there seem to be very few common threads between the Perak Malays of Swettenham’s generation, and the Malays of Singapore today. There are some, just not as many as one would think, which really reflects how much has changed over the past 120 years or so.

And even though Swettenham was writing as a British, for a British audience, Malay Sketches manages to preserve some respect for Malay culture. For the most part, Swettenham did not ride on the high horse so typical of many colonial administrators, such as James Birch who was assassinated in 1875, also in Perak. (Swettenham, in fact, devotes a chapter to recounting the tale of James Birch.)And the great thing about the book is that is debunks many stereotypes that are still propagated today; stereotypes that give the reader the impression that Swettenham, along with all other colonial administrators, did not find any genuine culture or civilisation when they arrived in the region. This is not to say, of course, that Swettenham did not form his own judgements on the Malay race which must, like every other character analysis, be taken with a pinch of salt.

Some interesting quotes from Malay Sketches:

‘Malaya, land of the pirate and the amok, your secrets have been well guarded, but the enemy has at last passed your gate, and soon the irresistible Juggernaut of Progress will have penetrated to your remotest fastness, slain your beasts, cut down your forests, “civilised” your people, clothed them in strange garments, and stamped them with the seal of a higher morality.’

‘From [the age of 5], she [the Malay girl] is taught to help in the house and kitchen, to sew, to read and write, perhaps to work in the padi field, but she is kept out of the way of all strange menkind.’

‘The general characteristics of Malay women, especially those of gentle birth, are powers of intelligent conversation, quickness in repartee, a strong sense of humour and an instant appreciation of the real meaning of those hidden sayings which are hardly ever absent from their conversation. They are fond of reading such literature as their language offers, and they use uncommon words and expressions, the meanings of which are hardly known to men.”

‘By the time the sun is well up there are fifty or sixty people (of whom about half are women), mounted on twelve or fifteen elephants, and some boys and followers are prepared to walk.’

‘The word is given to make for a great limestone hill rising abruptly out of the plain, for, close round the foot of this rock, eating its way into the unexplored depths of subaqueous caves, flows a clear mountain-bred stream, and, in the silent pools which lie under the shadow of the cliff, are the fish which with the rice and salt, will make the coming feast.’

And then there are other interesting subjects in the book, as well – such as superstitions, possessions, ghost stories, murders, running amok, romances and how to kill a tiger. Places like Kuala Lumpur, Melaka and Singapore come up, as do other communities, such as the Chinese and the expatriates. Fascinating for anybody interested in the history of this region.