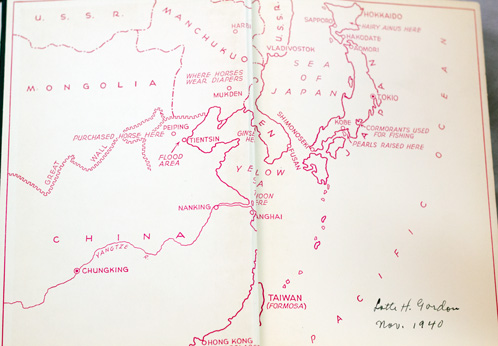 Travel writer Carveth Wells’ North of Singapore is probably one of my favourite books on the region, and of the travel literature genre. And so this review is likely to be long, involving much gushing and a few interesting tidbits on the region.

Before rambling on and on about the contents of the book – the book comes with great photographs (black and white) and a really nice map of the region for its end-papers:

Interesting photographs include an old Tiger Balm advertisement, the striped car belonging to the owner of Tiger Balm, the very first tiger caught on film, and the very first photograph of a tree-climbing fish. The fish, incidentally, is now used to debunk Einstein’s famous statement on teaching fish to climb trees:

Anyway. North of Singapore‘s title, while accurate, is a little misleading as to its scope. The journal is of a tour of the entire Asian continent which lies to the north of Singapore, and not just Malaysia. What’s especially interesting about this book is, it was written during Carveth Wells’ tour in 1939, when the world was at the brink of war. And so it is as much a world-at-war account as it is a travel one, which gives us a rare glimpse into the climate of the world at the beginning of World War 2. Wells encounters, for instance, the Japanese Occupation of China and Korea (Manchukuo), as well as a nervous British Hongkong anticipating a Japanese invasion. He gets caught in a monstrous flood in China and sees dead bodies floating around by the hundreds, and experiences anti-colonial sentiments throughout the region.

Another interesting thing about Wells was his deep involvement in Malaya – this book was written during his second voyage to Asia, but his first encounter was as an expatriate posted here to construct the Federated Malay States Railways, as well as the Causeway we all use today. He worked here as an engineer for 6 years, during which he learned Malay and explored the wildlife of the archipelago. And his attachment to the region is obvious as he hunts down his old homes and construction sites in 1939, 20 years after leaving the region. Of course, by this time, much has changed.

“Wherever I went in Japan, I found American products copied so accurately it would have been impossible to detect them, had it not been that the sale of such foreign products was forbidden.”

“Twenty years ago, young Chinese girls, with their feet bound until their tiny shoes were not much longer than one inch, were a common sigh; but I failed to see one such girl this time..”

“,,the Chinese still use rickshas and sedan chairs in Hongkong…the ricksha has practically vanished in Japan, yet the vehicle originally came from Yokohama, where it was invented by an American missionary in 1869.”

“Even twenty years ago, it wasn’t safe to drink the water or eat a salad. Practically everyone took quinine daily; it used to be given away at post offices. Huge pictures of Anopheles mosquitoes were placed in public buildings so that everyone might recognise the dangerous little lady. Nowadays, with first class drinking water brought from a mountain in the Johore jungle forty miles away, and every kind of modern sanitation, Singapore is so healthy that even the rats average only three fleas apiece..”

“Singapore used to be a much more important market for wild anyways than it is today. The animal market is still there, but only the shadow of its former self when it was not unusual to find a dozen orang utans for sale or half a dozen tigers.”

“He (the Malay) has trained a special kind of monkey, called a “berok”, to climb trees and pick the [coco]nuts…..anyone that has been well taught can understand at least a dozen words in the Malay language. Climb, pick, that, yes, no, large, small, green, yellow, hurry, don’t, and come down, are all in the vocabulary of a good monkey.”

“The survival of the Portuguese in Malacca is one of the most remarkable tributes to that race….Almost all of them speak Portuguese when they are at home, but theirs is the language of Alburquerque. Priests sent out from Portugal cannot understand a word of Malacca Portuguese and have to start their labors by relearning their own language.”

“I know no place on earth where so much can be seen and done in a short time. The streets were jammed with strange looking people dressed in brightly colored costumes. In a few minutes I saw the following unusual sights: Sitting on the sidewalk was an Indian being shaved by an itinerant barber who carried all the water he required in a small bottle and wiped his razor on his wrist. Then along came a holy cow being led by a man who carried a large basket containing small bunches of grass which people bought and gave to the cow. On inquiry I was informed that the man was a farmer who had taken an oath that his cow should never do any more work, not even graze. This meant that for the remainder of the cow’s life, the man had to cut grass for it. The owner of the cow evidently made quite a good living as a result of his oath. The next sight was a grand piano being carried through the streets on the head of eight men, all of whom had to trot in perfect unison, otherwise the piano would have crashed to the ground. Just then I happened to peep through an open gateway into a courtyard in which I saw half a dozen funeral pyres. On one, the corpse had only just been placed on the pile of wood and the fire was about to be started. Another was blazing away furiously while the rest were dying down, not a vestige of any corpse being visible.

Down a narrow alley we walked until suddenly we came to a temple in front of which was a lake of filthy green water. Wading about in the water was an Indian salvaging the garbage that was floating on the water and placing it in a canoe. Close by was a fakir sitting on a bed of nails and apparently not interested in us or anybody else. Then we came to a small sea beach on which were stretched hundreds of yards of brightly colored cloth, drying in the sun. As for markets, they seemed to be everywhere. In one market place there was a particularly holy cow with five legs, one growing out of the middle of its back. The horns and hooves of the animal were colored red and around its neck were garlands of flowers.”