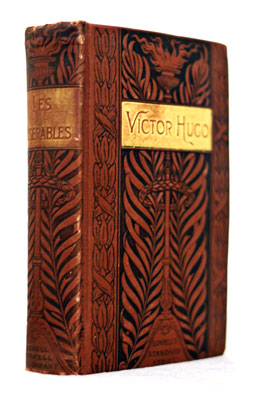 Today, book publishers – in fact, any owner of intellectual property – are up in arms about piracy in the Digital Age. But it seems like piracy, in any form, is almost as old as prostitution and spying, said to be the two oldest trades in the world.

I got curious about book piracy after we acquired Victor Hugo’s Les Miserables, published by the notorious business man/publisher John Lovell:

Beautiful, isn’t it? But it’s also pirated – sort of. This just goes to show that piracy doesn’t have to be substandard, much like how one can purchase a Grade A imitation Louis Vuitton bag today.

Technically, whether this book was actually a pirated copy or not can be debated (although John Lovell himself was a fraudster through and through). This is an American reprint of a French book translated in England, and was authorized neither by the French nor the British. And at that time, there were no laws in the U.S. prohibiting reprints of European books, although American books – and only American books – were protected by copyright laws. (John Lovell transgressed these laws, too, by selling American reprints in Canada.)

Needless to say, the Europeans were not happy. During the 1800s, America was known as the piracy capital of the (Western) world, and thousands of books published in Europe were reproduced in America as cheap paperbacks. And while a number of European states upheld regulations related to cross-border piracy, the Americans decided they weren’t going to be a part of it. The Europeans had had enough of it, but there was nothing much they could do.

Not that Europe never went through piracy. Book piracy, as we know it, began under Queen Elizabeth I in England. During her reign, only publishers she personally authorized were allowed to print copies of books like the Bible, or alphabet books for children. These publishers had monopoly rights, and in addition to keeping prices high, they weren’t very efficient. In short, supply was kept low, and demand was high. Smaller publishers, who were unable to win the Queen’s favour, got disgruntled and decided to take matters into their own hands, printing illegal copies of these books for cheaper and in greater quantities than the state-sanctioned publishers.

Moral of the story? Monopolies breed discontent, especially when they are perpetuated by the government.