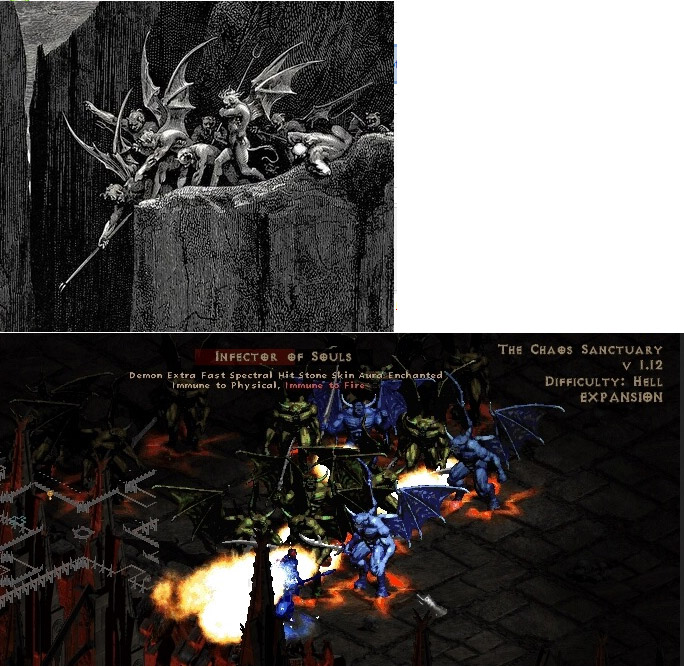 Gustave Doré (1832 – 1883) was a French artist, engraver, illustrator and sculptor. He is one of our favourite illustrators of all time, and his influence is so pervasive that everything from computer games (Diablo) to movies (Lord of the Rings, What Dreams May Come, The Ten Commandments) bear the unmistakable marks of his visual aesthetic.

Doré was responsible for some of the most iconic images illustrating Western literature’s greatest products: Paradise Lost, Dante’s Inferno, Purgatory and Paradise, and Don Quixote — as well as the Bible. His vast, horrific, otherworldly landscapes and creatures trickled down into popular culture of the 19th century, and continue to inform today’s popular art.

Diablo, the popular PC game, owes quite a bit of its concept design to Doré — for those who’ve played the game, getting swarmed by the winged demons in Act IV looks like the image at the bottom: a live-motion tribute to hell’s minions from Doré’s Inferno (top):

What Dreams May Come is a 1998 film about a man who dies and goes through heaven and hell. Large parts of the film look like Doré engravings coloured and put in motion (top). Here’s a scene of the protagonist crossing the river of the underworld (bottom):

Here’s another scene of hell with people’s heads buried in the ground. In the Inferno, the hero is led by Virgil through the depths, while in What Dreams May Come, Robin Williams runs alone, screaming:

Here’s another direct reference to same scene from Doré‘s Inferno, this time in Clive Barker’s horror movie “Lord of Illusions” in which a Satanic cult leader attempts to create hell on earth:

Here’s a scene from World War Z: a towering pile of zombies that seems straight out of Doré’s illustration for “Orlando Furioso” –

Lastly, here’s a scene from the Bible: it’s the famous act of Moses presenting the ten commandments for the first time. Here’s Charlton Heston from the movie in the 1956 re-enacting almost exactly Doré’s imagining of the scene (a wind machine would’ve really dramatised the scene in the movie, however):

Doré’s influence is of course much vaster than this — these are just samples that we had the time and the energy to include. There are thousands of films, music CD covers, theatre set pieces, animations and paintings/drawings derived straight from his work.

Here’s a great writeup on the legendary illustrator and here are some of our books containing his illustrations (these are the ones currently in stock):

The Divine Comedy of Dante: Inferno, Purgatory and Paradise