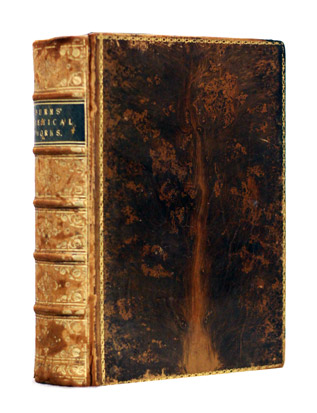 The Scottish independence referendum took place on 18 September 2014, and coincidentally, we recently acquired a beautiful edition of The Poetical Works of Robert Burns.

Robert Burns is one of Scotland’s greatest poets and lived from 1759 to 1796. In 1788, he wrote the poem Auld Lang Syne, which is now one of the most famous songs in the world. Those of us who grew up in Singapore will remember singing it at New Year’s Eve parties, random gatherings, and school graduations. And we’re not the only ones. The poet Rabindranath Tagore wrote a Bengali version titled “Purano shei diner kotha”, which became extremely popular. The Thais, Japanese, and Koreans have their own versions too – in fact, between 1919-1948, the Korean national anthem was set to the tune! And there’s even an irreverent made-in-Singapore Hokkien version of it on Youtube.

We rarely sing the entire poem, which was written in Scots. Here’s the original, taken from our edition of Burns’ works.

We twa ha’e run about the braes,
And pu’t the gowans fine;
But we’ve wandered mony a weary foot
Sin’ auld Lang syne.

We twa ha’e paidl’t i’ the burn,
Frae mornin’ sun till dine;
But seas between us braid ha’e roared
Sin auld lang syne.

And here’s a hand, my trustie fiere,
And gie’s a hand o’thine;
And we’ll tak’ a right guid willie-waught,
For auld lang syne.

And surely ye’ll be your pint-stoup,
And surely I’ll be mine;
And we’ll tak’ a cup o’ kindness yet
For auld lang syne.

Like the poem, the tune we’re familiar with wasn’t what Burns intended. Below is a nice video with the original tune and lyrics. This musician has also perform Burns’ other songs, if anyone’s interested. Enjoy!

Our online store will be closed from 15-19 August. Business will resume on 20 August. Apologies for the inconvenience. Dismiss