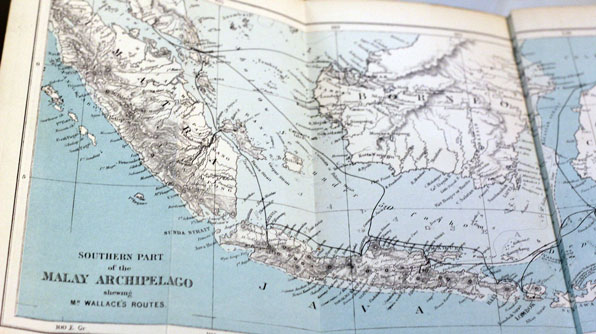 Alfred Russel Wallace (8 January 1823 – 7 November 1913) is one of the most important underrated figures of the 19th century. A friend of Charles Darwin’s, and whose paper Darwin read before publishing On The Origin of Species, Wallace posited a theory of natural selection strikingly similar to Darwin’s later publications. Given the close contact between the two men, some scholars today argue that Darwin had stolen many of Wallace’s ideas in order to complete his own theory of evolution – most scholars, however, say that the two men came up with the ideas independently.

Whatever the case may have been, the two men were close friends, close enough for Wallace to dedicate The Malay Archipelago “To Charles Darwin, not only as a token of personal esteem and friendship, but also to express my deep admiration for the genius and his works”.

One of the really interesting things about Wallace’s theory, at least for us in this region, is that he came up with it based on observations made in Sarawak. Thus his conclusion,  “Every species has come into existence coincident both in space and time with a closely allied species”, became known as the Sarawak Law.

The Sarawak Law was one of the outcomes of Wallace’s eight-year exploration of the Malay Archipelago, during which he visited Malaya, Singapore, the Dutch East Indies, and the many islands in this region. During this time, he collected many species of insects and birds, some of which are now in the newly-opened Lee Kong Chian Natural History Museum. For Wallace, collecting wasn’t merely for scientific research, but also for survival. Unlike Darwin, he wasn’t a wealthy, educated man and had to sell whatever he could (including beetles) in order fund his travels.

Eventually, his diligence paid off – but not necessarily financially. Wallace managed to travel more than 14,000 miles, discovered more than 5,000 species and was one of the first to warn the world of deforestation and climate change. All this, along with a host of important contributions to biogeography.

The Malay Archipelago, first published in 1869, records Wallace’s observations in the region. Other than containing very detailed studies of geography and natural history, the book also provided the Western world with invaluable information about the peoples and cultures of Southeast Asia. In it, he describes Singapore’s cultural landscape, Dayak villages, Hindu-Buddhist sites in Java, traditional houses in Sumatra, the customs of the Balinese, and other things he finds interesting.